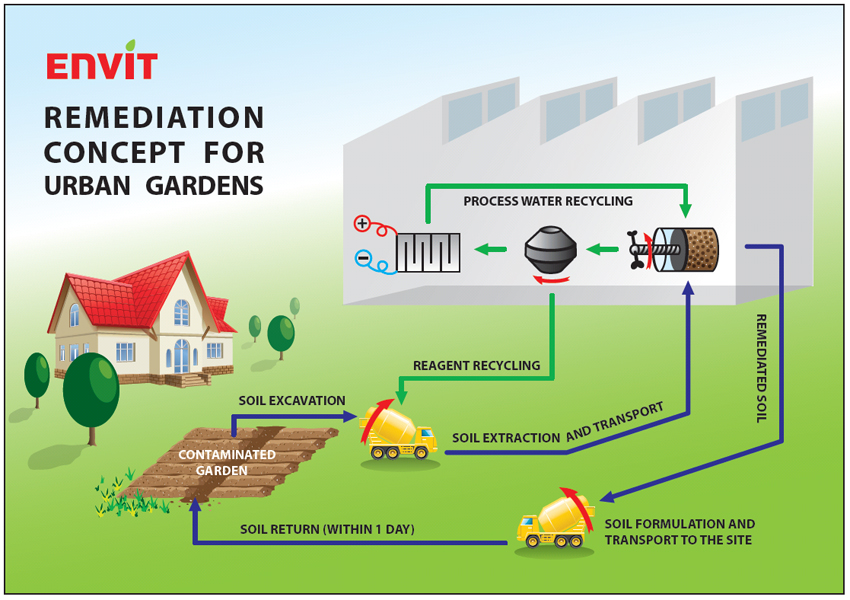 Residents of contaminated areas are exposed to toxic metals primarily through direct entry of contaminated particles into digestive system, including by ingestion of food grown in contaminated soil and inhalation of contaminated dust particles. Since the soil is today often considered as the primary source of pollutants in the environment, the remediation of soil is an urgent measure to achieve sustainable impact of rehabilitation. Selection of remediation technology depends on the characteristics of pollutants, type of soil and land use. Before the selection of the remediation technology, it is necessary to carry out feasibility tests of individual technology to achieve the best ratio of efficiency, economic and ecological acceptability.

In the field of remediation of toxic metals, especially with lead contaminated soil, the following technologies are known and used: 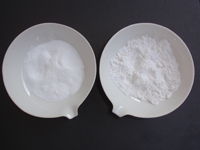 The use of EDTA is widely used in the following areas:

The feasibility tests have shown that soil washing with EDTA is more efficient than washing with acids in case of the carbonate soil with a high content of organic matter, which is an important Higher Meža Valley soil characteristic. Carbonate soils resist acidification and thereby increase the amount of acid in the washing solution.

The main technological problem of existing technologies of soil washing with EDTA is the removal of metal complexes and EDTA resulting from the process solution. Technologies for recycling of waste washing solutions exist, but they are costly and also produce a large quantity of toxic waste and are therefore not commercially available and implemented.

We have developed an innovative technology for soil washing, which enables recycling of EDTA and process water in a cost-effective way, in a closed loop process without any harmful emissions into the environment and producing only small quantities of waste. In the innovative procedure all the process water is recycled. Treatment of process water include chemical and electrochemical processes such as basic processes (metals precipitation and removal by filtration), acid process (EDTA recycling, EDTA precipitation and removal by filtration), electrolysis (decomposition of the residual EDTA, loading of metals on electrode). Developed innovative treatment method for process water during the soil washing brings, in comparison with the aforementioned known solutions, significantly lower (90 %) water consumption, significantly lower consumption of EDTA (> 70%), lower energy consumption and safe disposal of the toxic product.

The technology is patent-protected. Developed soil washing technology is, in addition to exceptional ecological benefits, economically interesting compared to existing technologies. We claim that the proposed technology is the only technology that allows the removal of toxic lead from heavily contaminated soil of carbonate origin that is rich in organic matter and retains its plant substrate function.

The benefits of novel ReSoil soil remediation technology have been published in technical publications:

Is ReSoil technology limited to removal of Pb from contaminated soils?

Response.  EDTA which is used as a chelating agent in ReSoil technology removes Cd, Zn, Cu, Tl and other toxic metals non-specifically from contaminated soils. Pb is the most ubiquitous of these metals and presents the most pervasive and persistent risk to human health.

Response.  Soil Cu, Zn and Mn are micronutrients and, when present in excessive concentration, pollutants. They are at least partly removed by ReSoil technology. For good plant growth in the remediated soil fertilization with Mn is usually required. Other major soil metals: Fe, Al, Mg and Ca are marginally affected by ReSoil.

Is ReSoil technology capable of removal of total concentration of toxic metals from soil?

Response. EDTA is the most potent chelating agent. Nevertheless, fraction of toxic metals occluded into the soil minerals and other solid materials is chemically and biologically unavailable. This fraction of toxic metals cannot be removed from the soil by EDTA. Specifically, toxic metals removal efficiency depends on soil type, means of pollution (air emissions, alluvial deposits, metallurgical tailings etc.) metal speciation (carbonates, sulfides/sulphates, oxides etc.) and metal fractionation into soil carbonates, organic matter, oxy-hydroxides etc. Typically, ReSoil technology removes up to 95% of Pb from acidic soils and up to 75% of Pb from calcareous soil.

The main human exposure pathway of Pb is through accidental soil and soil dust ingestion and inhalation. How does ReSoil mitigate this hazard?

Response. Any exposure to Pb is considered as potentially harmful. However, ReSoil reduces toxic metals bio-accessibility from soil into the simulated human gastro-intestinal fluids for at least 80%.

How ReSoil deals with As, which is frequent soil co-contaminant?

Response. EDTA does not chelate / remove oxy-anion forming toxic elements such as As. However, ReSoil technology enables for efficient immobilization of As by introducing iron and iron oxides directly into the slurry of remediated soil.

What about organic soil co-contaminants?

Response. ReSoil is compatible with ex situ and in situ chemical, physical and biological remediation technologies which are used for soils contaminated with organic pollutants. For example; ReSoil preserves soil microbial life and can be combined with natural attenuation, bio-stimulation and bio-augmentation remediation technologies which bio-degrade organic pollutants.

Soil washing technologies are historically characterized by production of large amounts of waste water which is difficult and expensive to treat. How much waste water is produced in ReSoil?

Response. ReSoil technology innovatively treats and recycles all process water (washing and rinsing solutions) in a closed process loop using inexpensive and waste materials. No waste-water is produced in ReSoil.

How much fresh water is used in ReSoil?

Response. ReSoil uses fresh water to compensate for water loss due to difference in moisture in soil entering and exiting the remediation process. This difference is usually narrow and little fresh water; < 10% of soil weight is usually consumed.

What about other wastes?

Response. ReSoil technology produces no gaseous emissions. Only the solid waste, up to 1.1 kg of per ton of remediated soil is generated.

Is ReSoil technology feasible in mobile and on-site remediation facility?

Response. ReSoil generates no waste-water and other emissions, produces only solid wastes and uses very little fresh water. Energy and infrastructural requirements for ReSoil are modest; mobile and on-site setting of the ReSoil remediation plant is feasible.

Response. Disposal of small quantity of solid wastes represent bearable additional cost to remediation. However, in a circular economy there is also alternative for solid wastes use. Pb and other metals absorbed on waste polysaccharide material (i.e. waste paper) can be reclaimed after incineration of absorbent and calcinated metal-oxides in a lime cake can be delivered and reused in Pb smelting plant.

How much of the chelating agent is recycled in ReSoil technology?

Response. ReSoil recycles at least 85% of EDTA in washing solution. Some EDTA is lost during remediation processes, mainly due to permanent absorption on soil solids. The lost chelating agent must be resupplied to the process.

EDTA exhibits poor photo, chemical and biological degradability and persists in the environment. Consequently, are there emissions of EDTA and EDTA chelates with toxic metals from ReSoil remediated soil, i.e. in leachates?

Response. In ReSoil process EDTA concentration in remediated soil is lowered to around 5 mmol kg-1 by closed-loop soil rinsing. Inexpensive addition of zero-valent Fe (Fe0, approx. 1% w/w) into the soil slurry enables for fast and permanent adsorption of residual EDTA and toxic metals chelates. Leaching of EDTA and toxic metals from remediated soils is thus minimized to the levels close or bellow emissions from original (not-remediated) soil. The adsorption of EDTA-chelates on Fe0 is abiotic; poor EDTA biodegradability and environmental persistence is not be an issue in curbing hazardous toxic emissions.

Is EDTA-soil washing harmful for soils?

Response. This depends on the level of contamination. Our results with low-moderately contaminated soils (< 1500 mg Pb kg-1) which are the most abundant indicate that the Pb concentration in edible parts of plants and vegetables produced on remediated soil is below values stipulated by EU legislature.

Why not using biodegradable chelators instead of biologically inert EDTA?

Response. Current biodegradable chelators are less efficient in toxic metal removal compared to EDTA, and more expensive than EDTA. They are non-recyclable which increases the environmental impact of their use.

Are there other available similar soil remediation technologies?